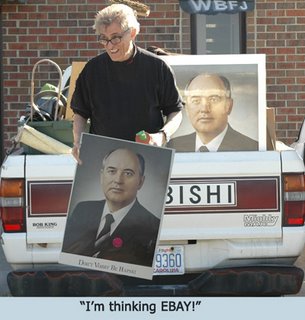 Ok..I admit it...I like ebay. The internet is neat...
I just did a blog search for "Papa John's Place" and quickly discovered I "ain't" the only papa j. out there! So be careful that you get the BFJ Papa John or you might get the wrong Papa! Just like Santa, I can't be responsible for all the look alikes with the same name (Ho HO).

Speaking of Papa John's, a few years ago my grandkids heard from their teacher that they were having pizzas from Papa John's. They were so excited that I would drive 5 hours just to delivery them some pizzas. I'm sure they were a little let down when they discoved there is more than one Papa John out there and I am not the one that makes all the dough.

O,my grandkids...thought yu'd never ask! LOL. I never told them what to call me. I made up my mind I would answer to whatever they came up with. I was so thankful from the start when Hannah began the tradition of calling me Papa John. I was dreading being called "papow", "pops", "pe-pa" or worse. Those are ok names but they just don't fit me. I just don't look like a papow".

Our birthday tradition for the kids is to take one big box with a lid and cover it in birthday paper and load it with unwrapped gifts. This year I added to the tradition and installed a "Birthday Button" on the box.

I got this little music thingy at Radio Shack that plays "Happy Bithday" (also programmable to play "Take Me Out to the Ballgame", etc.) when you press a little button. I fashioned the button to pop up on the lid of the gift and hid all the electronics under wrap. I labeled around the button, "Birthday Button... make a wish and then press the button."

I really wonder what that wish will be... I hope she will share it with me.

Another part of the birthday tradition is to include a card with a dollar bill for each year they have been born. So far this has not added up to much so maybe we should double it to take care of inflation.

But you know there is one thing I have learned. My grandchildren are much more satisfied with grandma and I shopping and sharing quality fun time with them than they are with really expensive stuff that they get tired of quickly. They love to shop the dollar stores and beg to go to Goodwill. You gotta train them early!

I hope they stay like that. It was a little different for their mom. When she was a teenager she wouldn't be caught unmasked in Goodwill or anything like it. Of course to their mom's credit that has all changed now as she is a great bargain shopper.

I CAME BY IT HONEST

I come from a long line of bargain hunters and junk collectors. My mother, my father, my brother,my sisters, my nieces... all of us received the gene. Of course, it can get a little out-of-hand if the "inflow" far outweighs the "outgo". Daddy said before he died he would like to clean out his stash and start allover again. We are not hoarders as such but have a hard time throwing anything away that we think will be reused in the next 20 years.

Well, I probably lost you a few paragraphs ago. I'll talk to you later. The Lord has allowed me to have a very eventful life for a grandpa so I'll probably have a lot more to share. If I run out, I start telling secrets on the rest of the WBFJ staff. I have been around here 20 years...I know a lot!