Scientific Evidence that a Hug-a-Day Can Save Your Life 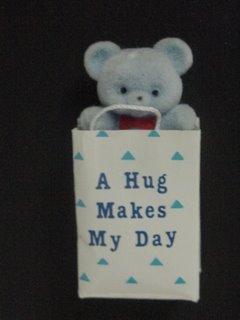 "Scientists are increasingly interested in the possibility that positive emotions can be good for your health. This study has reinforced research findings that support from a partner, in this case a hug from a loved one, can have beneficial effects on heart health."
Dr. Manny Alvarez/AH (Feb. 5th, 2007)

In a FOXNews report by Dr. Manny Alvarez, statistics are revealed from a study that shows the physical benefits of hugging another person, especially a spouse or partner. With the approach of Valentine's Day, Dr. Alvarez begins his report with a summary of just who St. Valentine really was, and how that relates to the research on hugs.

Says Alvarez, "Besides being a martyr for love, Valentine was actually one of the first to understand the psychology of human emotions. This young priest knew that men who were about to face danger and possible death could only be brave hearts if they went off to war with a hug from the girl they left behind."

Hugs—it turns out—really are advantageous to the health of our bodies, not just because they may "feel good," but also in light of the recent study done by the School of Medicine at the University of North Carolina-Chapel Hill.

The first part of the research, conducted by Psychologist Karen Grewen, involved 100 adults with spouses or long-term partners. The couples held hands while viewing an "enjoyable" 10-minute video. Then they were asked to hug for 20 seconds. Meanwhile, another group of 85 rested and waited, without any contact or their partners.

Eventually all the participants were brought together, and while being medically monitored, each one took turns telling about a stressful, or upsetting event from their lives. The researchers found that the blood pressure "soared" in those telling of the event—who had been deprived of contact with their loved one...their systolic reading climbing 24 points—double that of the couples who hugged.

In addition, the heart rate increase in the deprived-of-contact participants was also double that of those who hugged.

The study went on to reveal more of the mysterious benefits of hugging. For example: hugging releases oxytocin, the "bonding" hormone, in the blood. Oxytocin has been found to trigger a "caring response" in both men and women. Oxytocin is also the hormone which stimulates labor contractions and the release of milk during breast feeding. Finally, in all the women studied, researchers found a lower level of cortisol after hugging. Cortisol being the hormone the body releases when dealing with stress.

Alvarez concludes his report with a statement from a BBC News quote, by Dr. Charmaine Griffiths of the British Heart Foundation, who said, "Scientists are increasingly interested in the possibility that positive emotions can be good for your health. This study has reinforced research findings that support from a partner, in this case a hug from a loved one, can have beneficial effects on heart health."

A Papa John's Place "Thank-You" to "B" for bringing this new and amazing news to my attention.