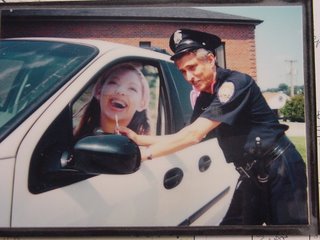 At least three questions come to mind. (1)What is a then 15 year old doing driving your van (2) Why does Staci's head look so big and (3)Why are you J. dressed up like Barney?

ANS: (1) It turned out to be a cardboard standup of Staci (2) Cardboard Standup...big head, no problem (3)I was the only one that could fit into the Barney Suit at the time and probaly the only one crazy enough to do it...

Blogger Notes: The whole thing was a record promotion...a few years back. The promoters sent us a standup and a disposable camera and a challege to make the most creative picture with the standup.

Well we went to all that trouble and didn't even get past "honorable mention"! I wouldn't have felt so bad until I saw the winning entry. The did a bunch of PhotoShop stuff and didn't even use the disposable camera or anything. So all we got out of the deal was a wrinkled cardboard standup and this silly picture!

(No cardboard standups were harmed during this photo shoot and was approved by the NAFTPOVTCS (National Association For The prevention Of Violence To Cardboard Standups) Also did not get arrested for wearing Barney uniform...the pants were 8 inches short and I wasn't wearing any socks..it was kinda obvious I was a Mayberry phoney.

That's my story and I am sticking too it!
Posted by John Hill at 6:21 PM

John. U r the funniest man. I appreciate your blogs!!