Which Picture to blog...oh me, a family decision! 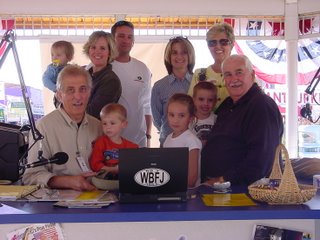 Really glad to see my sister, nieces, husbands and babies at the fair Saturday. I know this is a little indulgent but I wanted to show off my family a little and get a good picture of them on the blog.

(Click on each picture for the Seemore Warts version... bigger picture... better detail...)

After all, my sister "E" (Elaine not Elvis ) remembers when I was born many years ago at our home 10 miles south of Mayberry ...so I want to be nice to her...she knows way to much about me.

Anyway...we had a little trouble getting the perfect pose. "E" in her shades looks pretty cool in the first picture...but my mouth was open like ready to catch a fly so not cool.

Angela and husband Mark (left), Alison (middle), little William in Papa Jim's lap (far right) held their own in both pictures. Colton was trying to staredown that wasp on my microphone, and Madeline was trying to figure this all out. 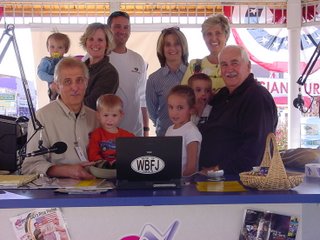 Second pose corrected most of the problems except I have this dumb look on my face and little William looks like he was tired of that man saying "cheese" so he decided it was time to move on.

Now before you go away think this is all silly...and you've wasted 60 seconds of our time reading this, just think back to the time you and the 9 members of your family spent a whole evening deciding which picture to put on your Family Photo Christmas Card. Don't say it's not so!

Anyway...I'm proud of my family from Mayberry...they really look pretty good in both pictures...and now you've met them!

(photos courtesy of F. Patterson...credit where credit is due..thanks, Fred!)
Posted by John Hill at 11:01 PM